Academic Freedom Index (AFI) was published on March 11 for the second time since it’s launch in 2020. AFI is a collaborative initiative of researchers at  Friedrich-Alexander-Universität Erlangen-Nürnberg, the V-Dem Institute, the Scholars at Risk Network, and the Global Public Policy Institute to measure the degree of academic freedom of the countries of the globe.

The index consists of five indicators on academic freedom, each of which is coded by country experts on a predefined scale from 0 to 4 and on a country-year basis:

The second edition of the openly available data is based on contributions by almost 2,000 country experts from around the world and covers 175 countries and territories (compared to 144 countries in the first edition) over the period from 1900 to 2020.

The creators classified each country into one of five categories based on the results of expert coding. Status groups are shown in the map below. 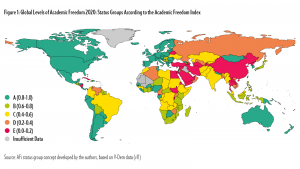 Compared to the previous edition, Brazil, Turkey, and Hong Kong are among the countries where academic freedom has deteriorated significantly (at least by 0,15 points), on the other hand, Kazakhstan and North Macedonia have highly improved since 2020.

According to the creators, university rankings should include AFI, as the different levels of academic freedom in countries across the world could hijack the data represented in league tables.