25Feb 2020 by fabrigyorgy No Comments

Taking a look at all appearances of institutions, ELTE tops the subject ranking lists with 69 presences during the last three years, while BME was listed 59 times, Szeged 53 times, Debrecen and CEU 49 times. At the end of the list Pécs gained 20 positions, Corvinus came with 17, 7 positions for Szent István University, and 3 for Pannon University. 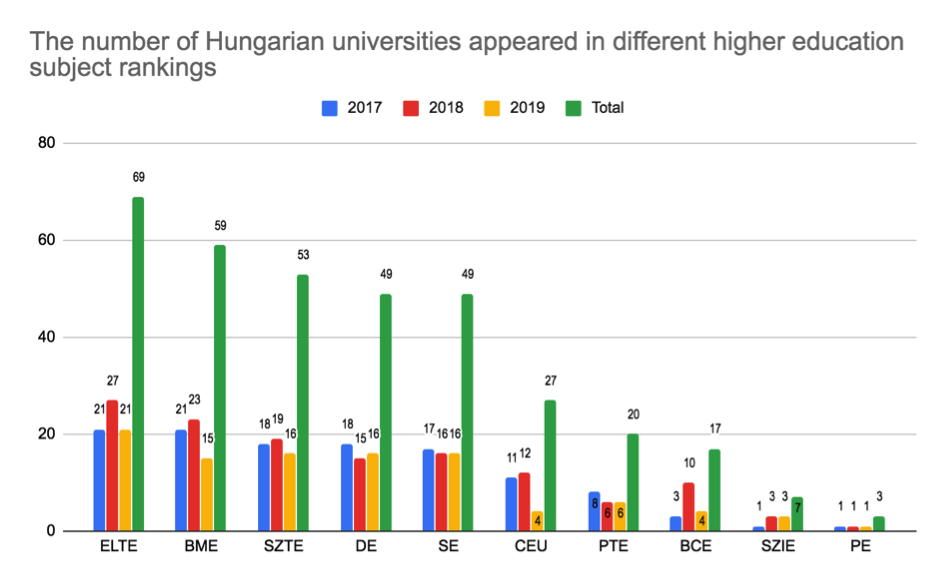 Due to these differences, Hungarian universities’ performance will be examined separately by rankings, without comparison.

In ARWU 2018-2019 four new ranks are seen comparing to previous years, while two former positions has fallen out. ELTE disappeared from earth sciences, but it emerged in public administration (151-200th). Szeged fell out from mathematics, but climbed up in the field of pharmacy and pharmaceutical sciences. In the field of public health two newcomers are listed: Semmelweis and Pécs are both appeared in 401-500th, while Debrecen emerged in ecology (401-500th). Some universities crawled back, such as ELTE in the field of mathematics, Pannon in the field of chemical engineering and Semmelweis in three different subjects (clinical medicine, pharmacy and pharmaceutical sciences, medical technology). The rest of the positions remained the same as in previous years. The best appearances among Hungarian universities belong to ATE (University of Veterinary Science) in the field of veterinary science at 101-150th and CEU in the field of economics (101-150th).

Leiden is special among higher education rankings as it is based on publication data which provides objectivity.

Hungarian institutions’ ranking was better in 6 cases in 2019, while 11 institutions’ performance was worse. ELTE, Debrecen and BME moved in both directions in the five areas, while Semmelweis and Szeged crawled back. In the field of biomedical and health sciences, there are only worsening positions, while in the other four areas some improvements are seen. One of the most significant changes belong to Debrecen, which rose from 719th to 695th in mathematics and informatics, while the other case is the improvement of BME in physical and engineering science, from 425th to 399th place. One of the major downturns is also related to the physical and engineering sciences, ELTE came up for 741st after 703rd, while Szeged moved from 646th to 681st. In the field of mathematics and computer sciences, ELTE also shew a significant decline, after its 544th place in 2018 this year it was listed 616th. The best Hungarian institution in Leiden subject ranking was Semmelweis University in the field of biomedical and health sciences at the place 372nd.

Among examined academic rankings, the most positive changes in the ranking of Hungarian universities are detected in THE subject ranking. There were only three downturns (ELTE, Szeged, Pécs – ELTE and Pécs fell back one category and Szeged was not ranked in 2019), with nine improvements. In three of these cases we can speak of a new position: Debrecen in the field of social sciences is 301-400th, Pécs was ranked 801+ category in physical sciences, while Szent István University appeared in 601+ in life sciences. Improving placements are also related to these two disciplines: ELTE, BME and Corvinus have improved in social sciences, while ELTE, Debrecen and Szeged have improved in physical sciences, compared to their positions in 2018. ELTE ranked the best in the field of psychology among Hungarian institutions at 251-300th place.

US News also shows more positive changes compared to last year’s ranking. In eight cases, institutions were left behind or dropped out, while the other 18 positions are a step up from last year’s list. The downturns are related to four disciplines and six institutions. Pécs was not ranked after last year’s 385th place in the field of neuroscience and behavior. In the same discipline, Semmelweis became 289th in 2019 after last year’s 279th place. In the field of plant and animal science ELTE (339 -›361) and the University of Pannonia (383 -› 464) significantly deteriorated, but as a new entrant the University of Debrecen was ranked 424th in this field. In chemistry, ELTE (483 -› 514), BME (474 -› 482) and Szeged (474 -› 525) also worsened, while Debrecen appeared as new entrant at 617th. In engineering, BME moved from position 449th to position 498th. Positive shifts can also be seen in physics, biology, psychology and oncology. The best performance among Hungarian institutions belongs to Semmelweis, what was ranked 112th in the US News subject ranking in the subject of cardiac and cardiovascular systems.

Overall, ARWU and Leiden tend to be stagnant, while the rankings of THE and US News are dominated by improving positions. Compared to previous years, Hungarian institutions are ranked in more and more fields of science.