19Feb 2018 by fabrigyorgy No Comments

The Eötvös Loránd University (ELTE) Faculty of Education and Psychology welcomed three leading ranking experts for a two-day visit in Budapest. The idea of this event comes from the research of the ELTE’s Social Communication Research Group, which carries out a special project analysing rankings on the academic level and implementing these in the practice of higher education management. The ELTE, one of the flagships of the Hungarian higher education, for the improvement of international positions of other universities too, considered it important to organise a meeting for Hungarian university representatives and ranking experts.

The three guests are important figures of the international ranking world and members of the Executive Committee of IREG Observatory on Academic Ranking and Excellence: Waldemar Siwinski is Vice President of IREG, Gero Federkeil has been responsible for coordinating the U-Multirank ranking, Dmitry Grishankov is the General Director of the International Group of rating agencies “Expert RA”.

After some meetings with ELTE-leaders, Thursday afternoon they had a two-hour workshop with the representatives of seven Hungarian research universities with the following goals: to present the changes of global rankings to the Hungarian universities in the light of the ranking experts’ experiences; to present the ranking strategies, particularities, ideas of Hungarian institutions of higher education to global ranking creators and experts; to support the international positions of Hungarian/Eastern European universities. 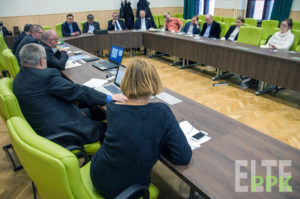 György Fábri, chairman of the Research Group and the ranking project, who planned and organised the whole program, started with a presentation that showed their recent activities, such as a monograph about the ranking-phenomenon, a professional website which monitors and analyses global and national rankings, and the preparation of an international ranking-conference in Budapest. Mr Siwinski’s presentation showed the changes in the ranking landscape during the last years. These days there are more and more universities, regions and subjects featured in the different rankings. Mr Federkeil talked about the working and methodology of U-Multirank. It is not a league table, more of a transparency tool that provides benchmarking options and makes the diversity of universities visible to students and others so they can make an informed choice about where to apply. Mr Grishankov presented the Moscow International Ranking, emphasising the importance of universities’ „Third Mission”.

The discussion with the representative members of the Hungarian universities covered several topics, such as the importance of regional rankings – while Hungarian universities are not presented among the top of the world, they do have good results compared to our neighbours. There were also remarks about the reputation measures that are not always clear enough, and the ways ranking business is sustained. Several questions were raised about the methodology of the U-Multirank and Moscow International Ranking. Thursday evening the experts had an informal dinner with Hungarian ranking researchers.

On Friday the IREG leaders met with László Palkovics Ministry for Higher Education. Professor Palkovics explained that the Hungarian higher education policy closely monitors global rankings. On one hand, it considers it important to get feedback on the performance of universities, and on the other hand they serve as a useful marketing tool in international higher education as well. That is why it is important to know the contents of the rankings, the meaning of the indicators and the trends. He agreed that the regional rankings and those of the subject fields became increasingly important. László Palkovics welcomed the idea of a conference in Budapest for next year.