02Jan 2020 by fabrigyorgy No Comments

For the first time, China produced more high-quality scientific publications in the field of chemistry than the US, according to the Nature Index. Chinese researchers’ publishing performance increased by one-sixth compared to 2017, thus doubling their share of the top 10 overall Asian countries. Although the United States is in second place, the strength of the two leading scientific powers is outpaced by the fact that the US is still ahead of the other eight countries behind it. From Europe, Germany (3rd), the United Kingdom (5th), France (6th) and Spain (10th) are in the lead. Interestingly, publishing productivity has declined everywhere except for the leading China and the 10th Spain. 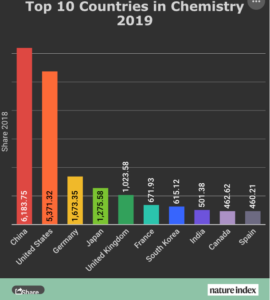