THE PROJECT FINISHED WITH A RANKING-TRAINING

Hungarian universities are motivated to have an insight into the methodology of global and regional rankings, and the potential of their excavation. This is the aim of the project, promoted by TEMPUS Public Foundation Campus Mundi  project (EFOP-3.4.2-VEKOP-15-2015-00001), and organized by ELTE PPK Social Communication Research Group. The research group, the leading scientific research center of Hungarian ranking research, (chair: associate professor György Fábri), organized an international workshop, as well as a training for Hungarian 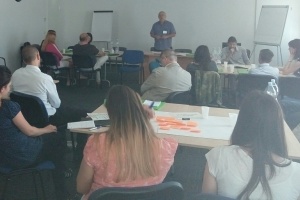 higher education experts. During these events the indicators and the performance parameters behind them, the relations between the ranking positions of global and regional rankings were revealed, and the rankings were identified as means of marketing-communication. The one-day interactive training closing the project resulted in a professional knowledge-base and a knowledge-network accessible by the universities. The organizing of an international ranking-conference has also been initiated.

The idea to organize a training was initiated at the international ranking workshop held on the 31st March, 2017, an outstanding event of the ranking project promoted by TEMPUS Public Foundation Campus Mundi  project (EFOP-3.4.2-VEKOP-15-2015-00001).

The event, held on the 20th June, 2017, was participated by experts from all over the country: higher education experts arrived from Miskolc, Eger, Budapest, Veszprém, Szeged and Pécs, with collegues of the university libraries, international administration and communication centres along with university leaders and professors.

The aim of the training was to broaden the ranking-knowledge of the national experts of higher education, to map the ways rankings can be used, and to determine the needs and advatage of applying them in practice. Beyond these, the participants were provided with professional materials: the Hungarian version of the résumé of the workshop held in March, as well as a guide to ranking-reading.

The data collected at the beginning of the training showed, that the best-known rankings are ARWU, THE, THE-BRICS & ENGINEERING, QS, QS- Europe and Central Asia and LEIDEN. These are considered to be informative and useful for general interest, and while mostly used for benchmarking of the institution, these are barely used for networking.  As far as the indicators are concerned, financing capacity, international character and scientific research are of main interest for those answering the questionnaire, less emphasis falls on education output and reputation, with professor supply, professor capacity and web presence lagging far behind. The answers to the questionnaire filled again at the end of the training proved a positive impact of the event on how reputation, learning environment, educational output as well as the usefulness of degrees are considered.

We formed three groups in a work-cafe style, and these strongly reclined upon the knowledge of the participants, their questions and personal experience, ensuring an effective access and interactive feed-back to the knowledge-units by way of varying the group-members.

At the table dedicated to scientometrics lead by Sándor Soós, head of the Library and Information Centre of the Hungarian Academy of Sciences, Budapest, the participants discussed the issues of scientific performance. The publication databases are trustworthy, but their relevance is restrictied, and their polarity concerning scientific fields comes from the uniqueness of the publication business. At the same time the publication indices are not exclusive means of measuring scientific performance, since this is a much more complex process. Therefore the social-communal-economic effect of the given scientific work or as a matter of fact the implementation of its implementation is of as much importance. The debate on the measurability of the above is currently going on. Therefore, instead of considering them to be of absolute relevance as scientific publication ranking-indicators, it should be much more reasonable to use them whithin institutions and professional areas. The national research-assessments are spurred by rankings, but these, as such, are just ’removable bridgings’ to prepare an overall and valid research-evaluation.

The issue of the second group was the role of indicators. This table was headed by Dóra Czirfusz, ranking-expert, Master’s student of the Faculty of Social Sciences of ELTE. This section overviewed three main global rankings (ARWU, THE, QS), with special emphasis on methodological issues used by the given rankings, such as weighting, data source and the possibilities of normalization. The participants agreed, that the reputation questionnaires are less trustworthy than the data-based indicators in spite of the fact that the practice of providing data is not yet a matured one at the participants’ institutions. So, the drawbacks (like harmonizing data provided by national institutions and data needed by global rankings) were also listed. From among the indicators concerning publications, beyond impact factors and h-index, the possibility of the use of g-index also emerged. The question of the possibility for smaller institutions to get into the rankings was raised. The participants suggested to build network with ranking-makers. There was concordance in finding professional field rankings (QS) to be of better chance for Hungarian universities to access a position on them, and that regional rankings are more informative for students than the global ones.

On the whole, the ranking position for the institutions is a possibility that may contribute to form a good reputation, whereas institutions have little chance to influence their ranking position. Framing the aims (which ranking do they wish to move to a better position) and elaborating long-term strategy may facilitate this issue, for which a group of experts within the given institution focusing on ranking (data providing, networking, result-analysis and communication) is absolutely necessary.

The topic of the third group, lead by György Fábri, assosiate professor, head of the Social Research Group at ELTE PPK, and moderated by Ágnes Hosszú, student of Doctor School,  related to this: how to use rankings as means of  communication, policy-forming and student-recruting. All agreed, that institutional marketing is a recognized function of rankings, thus being important in reaching to-be students

To get a good position in a ranking, however, a targeted  communication is necessary. Rankings are therefore communication programs from both points of views. It is reputation that can primarily be strengthened in rankings, for which more up-to-date and effective methods are necessary than newsletters. To organize international conferences is costly, but it is the most useful form, while due appreciation of foreign students and tieing them to the institution as ’marketing-conveyer’ may be useful. Besides, disciplined nomination for affiliation of publications or building network with  honorary professors is much cheaper yet indispensable. 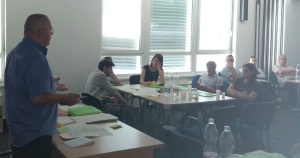 During the dispute the necessity to compare regions and fields also emerged, as well as the importance of regionality in general. Likewise, a general key issue is the preciseness of data providing. As for Hungarian institutions are concerned, there is no official and organized service within their administration to provide data for rankings, and interpretation of data types sometimes differ from that of the ranking-makers.

To sum up, the training resulted in providing practical information for universities, stimulating joint thinking, that would make a starting point for continuous information service. The organizers offered www.ranking.elte.hu hompage to be the surface of this information service, and they also initiated the elaboration of a knowledadge-network solution.